The Production of the LEGS Handbook

LEGS is an independent initiative that aims to improve the quality and livelihoods impact of livestock-related projects in humanitarian situations.

The Production of the LEGS Handbook

The development of the 1st edition

The LEGS Steering Group oversaw the process of developing the LEGS Handbook. Once the key content areas were prioritised, expert authors were identified to lead the development of the standards and guidelines for each technical area.

Complementary to the production of the LEGS guidelines, an electronic decision making tool was developed based on the processes and decision-trees outlined in LEGS. The tool is available on CD-ROM and also as a download from this website – click here.

Some topics are not covered by LEGS because information is already available elsewhere, or because other processes may be better suited to develop guidelines on those issues. In the case of trans-boundary animal disease outbreaks, the FAO Emergency Prevention System for Transboundary Animal and Plant Pests and Diseases has developed guidelines on emergency preparedness and response for such outbreaks, read more on EMPRES.

A first draft of LEGS was compiled by the technical authors and reviewed by the LEGS Steering Group. This draft was then made available, via the LEGS website, to the members of the LEGS mailing list (approximately 1,800 individuals and organisations) for review. The feedback received was incorporated into a second, field test draft, which was distributed to 68 organisations and individuals who had expressed interest in testing the guidelines in real emergencies.

In addition, LEGS review meetings were held at AU-IBAR in Nairobi and at Tufts University in Addis Ababa. At the AU-IBAR meeting, held in January 2008, participants gave feedback on the LEGS Field Test draft and discussed options for encouraging the dissemination and adoption of the guidelines and standards after publication.

At the Addis Ababa workshop in February 2008 a group of NGO and FAO representatives reviewed their response to the drought in Afar in 2007, using the LEGS draft guidelines and standards as an evaluation tool. Participants then shared their reflections on the usefulness of the standards and information contained in the draft, and made suggestions for improvement.

The feedback from both the real-time testing and the review workshops was collated and reviewed by the Steering Group, in order to agree on a final version, which was then submitted to the publishers.

The revision process and production of the 2nd edition LEGS Handbook

In 2013 a consultation process was launched via the LEGS website and mailing list to gather feedback on the first edition of the LEGS Handbook. Briefing papers were commissioned on new issues or key topics that needed enhancing, including: cash transfers; gender; climate change; animal welfare; livestock in camps; and resilience. The Handbook was thoroughly revised to incorporate the results of the consultation and the findings of these technical reviews. The case studies were also expanded and separated into process and impact examples.

Based on feedback on the first edition, the language was also edited for clarity and accessibility, and a new design and format were commissioned to make the Handbook clearer and easier to use.

As for the first edition, the revision process was overseen by the LEGS Steering Group. 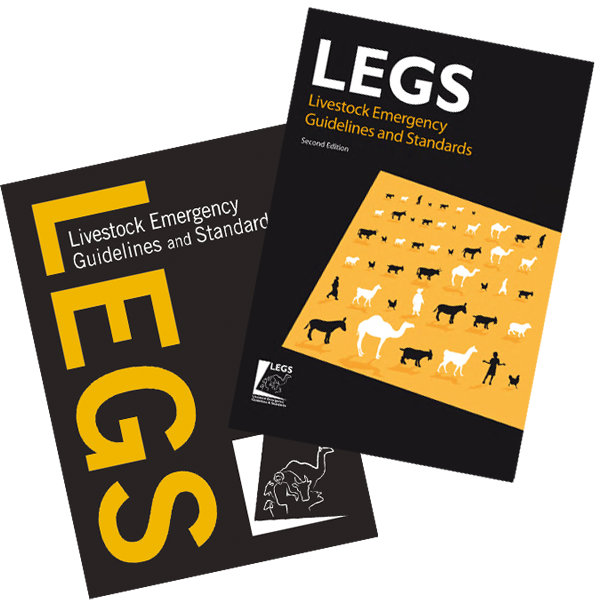 The LEGS Handbook provides standards and guidelines for appropriate and timely livestock-based livelihoods responses in emergencies, using a participatory and evidence-based approach. The Handbook was produced through a broad consultation process, drawing on good practice worldwide. The LEGS Handbook is a companion to The Sphere Handbook alongside other humanitarian standards which make up the Humanitarian Standards Partnership.

What Do People Say?